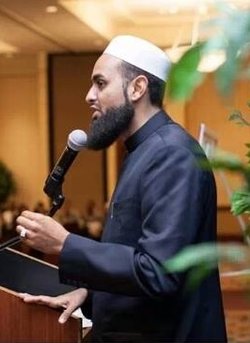 ​
Imam Azhar Subedar is a native of Canada. He grew up and attended school in Ontario. In his early teen hood, by means of the prayers of his righteous parents and Grandmother, he dedicated his Life towards serving Islam.

Beginning his studies at an Islamic School in Arabi Louisiana, he later on traveled to England in 1994, and completed the remainder 7 of a 10 year course in attaining an Islamic Scholarship.Alhamdulillah, in November 2000, Imam Azhar graduated from the “Institute of Islamic Education”, with the degree of: M.A. in Shariah of Islam with Ijazah in Hadeeth & Certified Qari & Muqri (Teacher) of Tajweed, Al-Qira’aat As-Sab’ah & Al-Asharah.

From 2002 to 2015, Imam Azhar Subedar served the Muslim community of Southwest Florida as the Imam, Khateeb, Teacher and Religious consultant.
He continues to this day as a religious adviser to the Florida Department of Education for over a decade.
He was also a Member of White House Faith Base and Community Initiatives.