I hope you had a blessed Ramadan. Over the past few days, I’ve been personally speaking with many of our passenger and giving them updates regarding the availability & the cost of the package. I have also not been able to answer a lot of the incoming calls / emails due to the same reason of having conversations with other customers.
I would love to talk with each one of you and explain in detail what is happening and the reasons behind it, but I figured in order to do so would require days perhaps even weeks. To speed things up and to make this process more efficient, I decided to write this short explanation and cover as many topics as I can. PLEASE DO NOT SHARE THIS LINK WITH OTHERS.

First of all, I would like to remind everyone that due to the extremely low availability, we are going through the applications in a chronological order of confirmed registrants and we are working our way up.

Everyone is interested to know what is taking so long in receiving Hajj updates. As of now, we still haven't received the exact number of visa's our company and any other company will be getting this year (InshaAllah in a day or two) but we cannot wait any longer for them to process all the info. We need to move forward and start working internally. During the past week, we have been contacting confirmed registrants in the order in which they filled the application and are inquiring from them if they would like to proceed with their plans Or if they want to change their plans due to the unprecedented increase in cost.  Because these are a LOT of changes and A LOT of information to process, it is really slowing things down for us to wait for a response and then go to the next person in line.
By creating this page (waiting room), I'm hoping this would help things move a little faster. I want everyone to read this through and there is a survey at the bottom that I would like you to fill just so that it can help us move things quickly .

COST OF THE PACKAGE:
Lets just address the most important concern after the availability, the cost of the package was anticipated to go up but none of us could have predicted the drastic amount of increase which had made the total cost almost unaffordable for some of us. Following are some of the reasons for such an increase
TIMINGS OF THIS MESSAGE:
One would argue that what is the point of sending this message out to people at this time being there are so many variables, why not wait another week or 10 days to get proper completed official information.
First of all, I am getting very frequent calls /messages regarding updates because everyone wants to start planning and start working on their schedules / time away from work or family. This would address some of the concerns and people will have some information so they can have conversations within their families and decide if they want to continue with their plans or if they want to hold them for now.
Another very important reason to send this right now is very soon, like within the next few days. Bigger companies that usually takes thousands of hajjis will be informing a lot of their customers (maybe in thousands) that they cannot accommodate them this year due to low availability. At that point, any available package will be gone from the market. I want to try to assess the number I have of people interested in moving forward so I can maybe try/attempt to acquire more visas from other operators.

WILL THE PRICE GO DOWN IN THE COMING YEAR?
Nothing can be predicted but based on the changes in the way Manasik area is being handled, it doesn’t seem that the cost will be coming down anytime soon in that regard. Assuming (and that is a big assumption) that COVID would eventually be part of regular life and there will be no restrictions in the number of visa’s allocated to us in future, I believe there will be some reduction of cost regarding that aspect. In total, if everything gets closer to normal, I think the price might drop by 1 to 2 grands at most. (many of my friends feel otherwise).  Even if the cost doesn’t go down, at least we will have an idea from the get-go and maybe re-introduce the economy packages with apartment buildings away from Haram as an additional option.

SPEAKING WITH OTHER AGENCIES:
At the request of some of you and for my own information, I’ve been contacting many other hajj companies to inquire about their packages and details. Most of the companies are in the same predicament and they don’t have a price nor availability. Some of them with decent itinerary and fair costs do not have availability. Some still have availability but not the best fit for me and some others that I’m trying to accommodate. Below is a screenshot of 2 bigger companies that I recently was made aware of and they do have availability
​
DISCLAIMER: I’m no way affiliated with any of these companies, nor do I recommend them over my package. I also do not have their permission to share this info which is why I am hiding their name and the contact information. if anyone wants to contact them, they can email me privately and I can share the contact info. The only reason I’m sharing is because none of the websites are updated and most of the agencies are not answering calls nor providing any information. By Sharing this information, some of you can get an idea that the change in cost is universal and not just limited to us.
​COVID PROTOCOLS
This one is just a reminder that COVID is not over yet and the Hajj flight will require a Negative PCR test 72 hours before arrival along with vaccination documents. We will make everyone sign a waiver that if they contract COVID right before the travel date and for this reason or any other, if they cannot make it to hajj. We will not be responsible for the loss of funds. Once the visa is issued, there is absolutely NO REFUNDS of any kind. Even if we want to issue a refund, we don’t have anything under our control and no hotel or any vendor for hajj will be issuing a refund on their behalf. We will recommend people to look into travel insurance to cover such a cost. The reason I wanted to bring this info right now is so people can make an informed decision with the realities of the world these days.
Our recommendation would be to quarantine yourself 10 days before the travel date. Also take frequent tests in case you tested positive , you have 5 days to wait (as per CDC) and then you can travel afterwards. and finally look into travel insurance through 3rd parties.

PAYMENTS
We need to make payments to the hotels and other vendors as of right now in order to secure our packages and finalize our contracts and get the paperwork in order for visa’s. By Ramadan, each year we are done collecting all the payments and spend the rest of the time preparing for hajj. Because of all the uncertainties, we are running behind and we need to catch up with collecting all the payments. If you are deciding to proceed with the hajj plan, we expect 80% of the payment (recommend 100%) within 72 hours and the rest of the balance in the following 2 weeks. If for some reason you need to adjust the timeline, you can contact us through email privately with an alternate schedule. Just a reminder that until all the balances will be taken care of, the visa application will not be move forward. I understand that it is a Lot of money in a very short time which is why I recommend only to proceed if that is something feasible for you.

DUE DATE
You need to fill out the below form and respond within 48 hours by midnight 5/8/2022 . If you need more time, you can select additional time needed and that will give you an extra 48 hours. As much as we would like to give you more time, we are really confined here, and we also need to inform others about the availability so they also have some time to make a decision likewise. Your lack of a response to below form would result in your spot being lost from the queue. 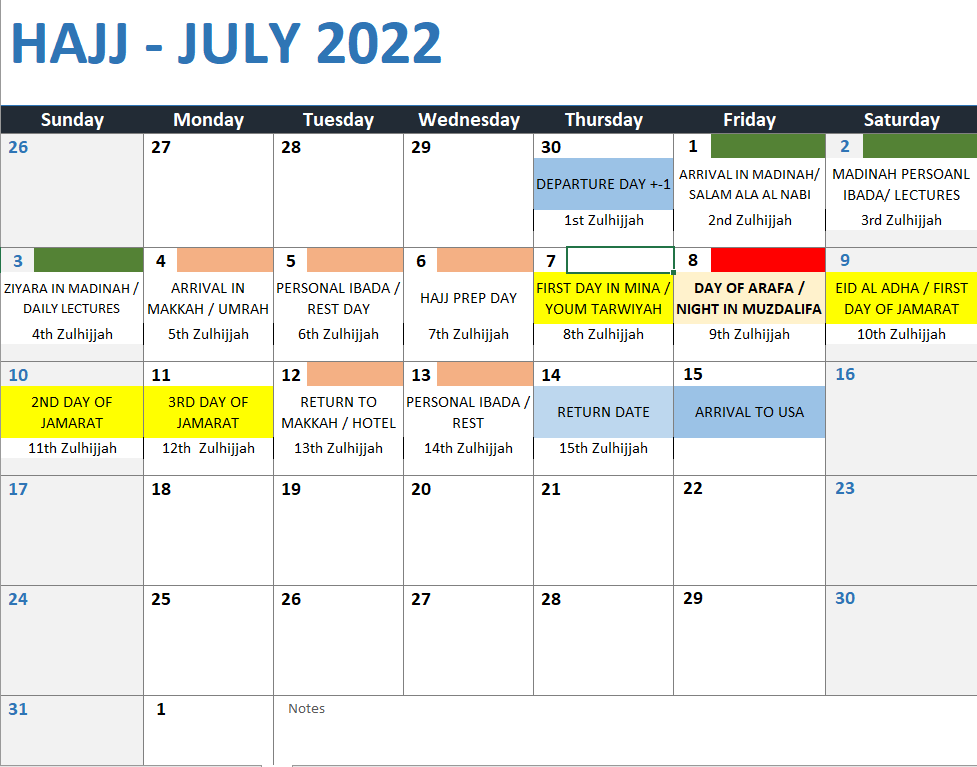